If you really care about reducing the murder rate of the United States, gun laws might be one of the most ineffective ways to approach the problem.

If we’re going to compare ourselves to other countries like the UK, let’s take a broader look.  Here’s a list of murder rates by country compiled by the UN:

The countries with the 5 highest murder rates (Honduras, El Salvador, Ivory Coast, Jamaica, and Venezuela) all have stricter gun control laws than the US, and all have murder rates over 10 times higher than the US.  In Venezuela they’re only allowed to own 22s, yet their murder rate is over 10 times higher than ours (Chavez has banned guns in 2012 1).  All of them require a license to buy a gun, which isn't mandated in the US.  All of them require records to be saved, which isn't mandated in the US.   In fact, almost every country higher than us on the murder rate list has stricter gun laws than us 2.

Then we move into more ‘civilized’ countries.  The Bahamas has a murder rate over 6 times higher than ours, and has stricter gun laws.  Russia has a murder rate more than double ours, yet handguns and some semi-automatic weapons are banned.

Then we get to the bottom of the list; countries with the lowest murder rate.  Near the bottom you'll find the same type of gun control laws that are found at the top of the list, some even have complete gun bans.  There are two countries with a 0% murder rate… One has strict gun laws, the other allows guns including handguns.  Switzerland has one of the lowest crime rates in the world, while having one of the highest gun ownership rates in the world 3.  They too have a right to bear arms guaranteed by law.  Serbia has the 2nd highest guns per capita rate in the world, yet a murder rate the same as the UK.  Norway has a high gun per capita rate, gun laws similar to the US, yet is tied for the 6th lowest murder rate.

You'll notice that the countries with the highest murder rates have low gun ownership rates.

So is there a trend we can get from the data?  The top of the UN murder rate list is probably due to lawlessness, corrupt governments, lack of law enforcement, and organized crime (sometimes allowed by the corrupt govt).  I don't believe anyone would say more gun laws in those types of countries would help.  But there are many countries just as civil as us, with stricter gun control laws, with the same or higher murder rates.  Norway, mentioned above for high gun ownership and low crime rates, was home of the 2011 island attack, which claimed 77 lives.  Some would say the United States has the least strict gun control laws in the entire world.  I challenge gun control advocates to explain why half of the world's countries have murder rates higher than ours.  I also welcome those who claim gun control will increase crime to explain why half of the world has lower murder rates than ours.  With murder rates and gun control strictness being all over the spectrum, any attempt to correlate the two is incorrect and deceitful.  So the trend? As far as international gun control strictness and murder rates... there doesn't appear to be one.

While I claim that there is no correlation between gun control laws and murder rates, I do want to point out that using the UK to lambast the US gun policies might not be the best idea.  Below is a graph which shows homicide rates through the years.  While their murder rate is lower than ours, their murder rate has gone up since enacting their strict gun laws which the media seems to be praising recently. 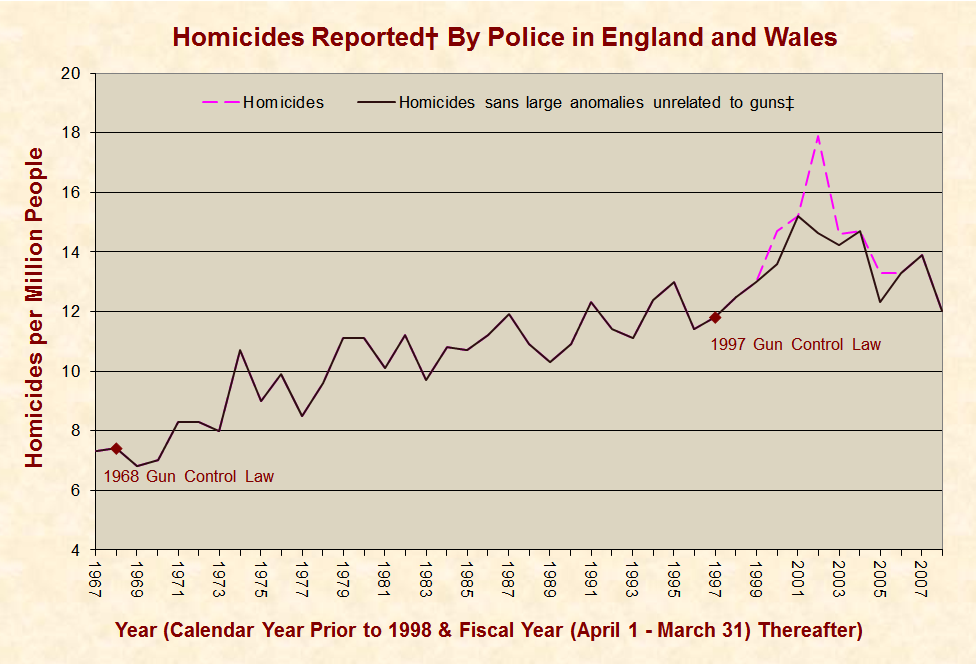 If you want to look at statistics domestically you’ll find that while gun ownership has increased over the past few decades, violent crime has decreased.  Let's look at some cities which have strict gun laws.

Raw data provided by the FBI:

So the above mentioned cities which have very strict gun laws (or had gun bans) have 13.61% of gun murders but only 4.46% of the US population.  The above figures reveal another reason why the US/UK argument is flawed.  The current argument uses the US gun murder rate as a whole, which also includes the 22% of gun murders that take place in areas with strict gun laws like the UK.  You can't have your cake and eat it too.  While the gun murder rate in the US would still be higher, I'm just pointing out why the argument has a basic flaw at it's core.
Let's look a little deeper into the 8583 gun murder figure:

That means that 22.51% of gun murders in the US happen during felonies or gang violence 11.  The number could be higher but the FBI has 3586 uncategorized gun murders.  Would gun control prevent felons and gang members from using guns?

What effect has gun control had in the US?

In 1976 Washington D.C. passed a law which banned handguns and required all other firearms to be stored either disassembled or trigger locked.  The graph below shows homicides per year 13 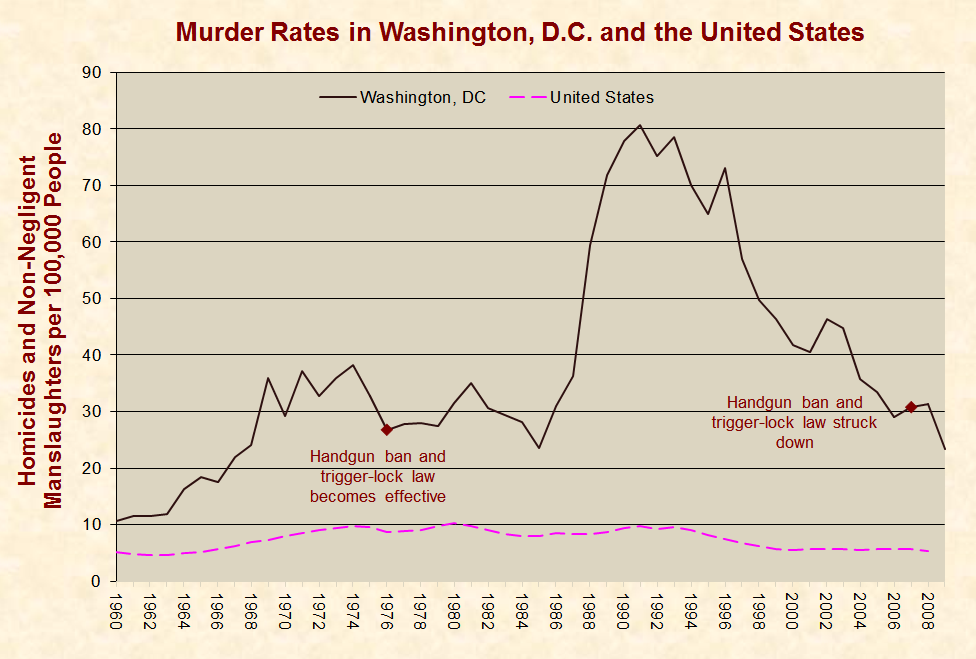 Obviously, banning handguns didn't help their murder rate at all.  The massive increase of homicides in the 80s and 90s has been attributed to the 'crack epidemic'.
Let's take a look at Chicago 14: 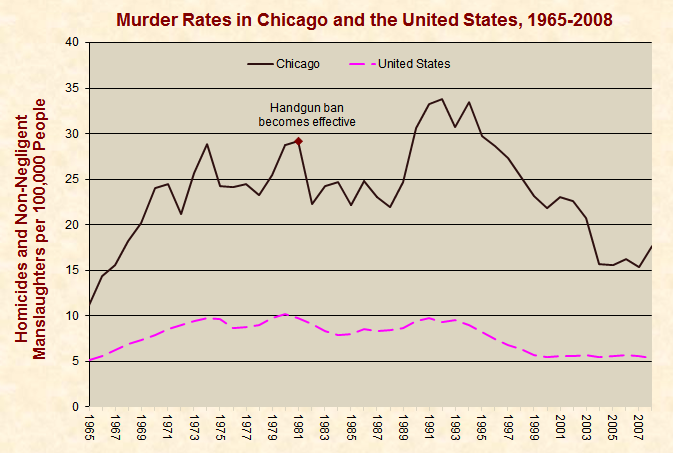 As you can see, Chicago had the same spike in murders, even though they banned handguns. 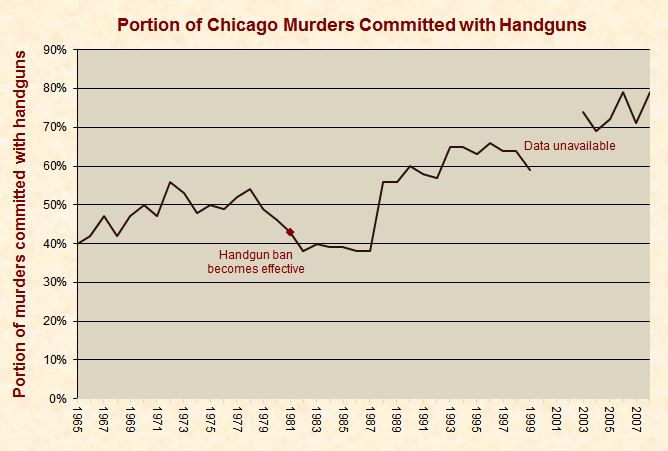 Murders with handguns in Chicago went up after their ban.

The legislation that is being proposed right now is renewing the federal assault weapons ban.  Our worst school killing in history was in 1927 where 44 people were killed and 58 wounded.  The sleazeball didn’t use a gun at all.  The Columbine shooting happened during the previous federal assault weapons ban (1994-2004), and no assault rifles were used.  Of the 4 weapons and 16 magazines that were used, only 2 of the magazines would have been banned.  One of the handguns could have possibly been banned depending on the specific model.  California which currently has the strictest gun laws, including an assault weapons ban, had 14% of the nation's gun murders as mentioned above.  In Connecticut, where the school shooting took place last week, there is a current assault weapons ban.

It's also important to note that the 'assault weapon' term is an invention of modern media.  It relates to the military cosmetic characteristics of a gun instead of it's functionality.  Below are 2 Rugar mini-14s.  One is the ranch model, the other is the tactical model.  Both are the same base gun, but the tactical gun is cosmetically different.

Under an 'assault weapon' ban, the tactical model would be banned while the hunting model wouldn't, but they're both the same gun and accept the same magazines.  Rifles actually make up a very small proportion of gun crimes.  According to the FBI, there were 323 murders from rifles in 2011 18.  In comparison, there were 1694 knife murders (or other cutting tools), 496 blunt murders (baseball bats, hammers, etc), and 726 murders by using hands, fists, and feet.

So where do the guns come from that commit our 8535 gun murders?  The Bureau of Justice Statistics revealed in 2001 that less than 1% of firearm offenders acquired their weapons at gun shows  19.  In a study conducted on prison inmates in 1991, the Department of Justice reported that 9% of guns used in crimes were stolen, 29% were bought on the black market or through a drug dealer, and 31% were bought from a friend or family member 20.  80% of the inmates had previous convictions, making a good portion of the purchases from friends/family illegal straw purchases.  This means 70% of the guns criminals used were acquired in illegal or questionable means.  This is one reason why gun control laws have little affect on murder and crime outcomes.

The study was conducted again in 1997, after the federal assault weapons ban went into effect: 21

After the ban went into effect, guns acquired through illegal or questionable means increased from 70% to 80%.

So what can we glean from our domestic numbers?  I've shown how California and Texas have opposite gun laws yet both have proportional gun murders.  I've pointed out major cities where strict gun laws and bans are in effect, yet they still have high murder rates.  You can look at other large cities like Detroit where there are no gun bans and find high violent crime and gun murders. in 2011 Detroit had 344 murders.  Finding what % of those were gun related is proving difficult, but a few local newspapers published the 80% figure.  That would put it in the same range as the other urban areas with gun bans and restrictions listed in the table above.  So looking at different areas of the country over the same time period shows there is no effect of gun control laws on gun murders.  When you look at gun murders as a function of time, gun control laws don't prevent murders.

On the other side of the argument, while it does seem that murders, including gun murders, went up when cities like DC, Chicago, NYC, and Philly banned guns, which they did, it was also happening nationally.  Rushing to say gun control causes increased crime rates I believe is also unfounded.  It's also important to note that gun violence and murders did fall after the assault weapons ban ended.

Maybe it's analysis like this that made our very own CDC admit that the "evidence was insufficient to determine the effectiveness of any of these [firearms] laws" after analyzing 51 studies in 2003 which looked into gun control laws including waiting periods, 'shall issue' permitting, and gun bans 22.

Over the past 22 years, the gun lobby has been the 68th largest lobby on average 23.  Not as high as the media would lead you to believe, is it?